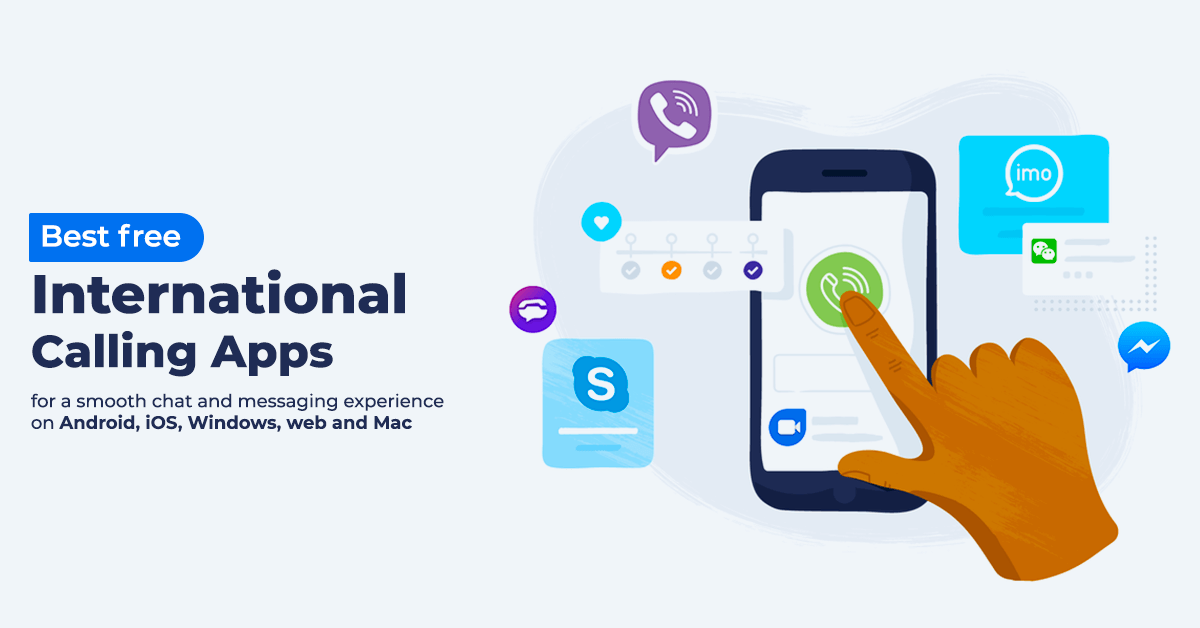 Best International Calling has come a long way from the days of costly phone calls and complicated arrangements. These days, it’s as easy as texting. In fact, many international calling apps are available for free on iPhone.

Having an app that lets you stay in touch with friends and family around the world is especially useful if you’re traveling or business away from home for long periods of time. Here are our picks for best international calling apps on iPhone:

As the name implies, Viber Messenger is a free calling and messaging app that is available for both Android and iOS devices. It has garnered over 700 million users across the world. Which makes it a great option if you’re looking to effortlessly connect with friends and family members abroad.

Viber lets you call friends or family who has also downloaded Viber Messenger on their smartphones or tablets. You can also send text messages, photos, and videos by using this app. So you don’t have to worry about accidentally leaving your phone behind when traveling abroad.

And with its geotagging feature that allows users to share their exact location with others. it’s easy enough for people who are separated by distance. But still want to keep in touch no matter where life takes them next!

Google Hangouts is a great app if you want to make international calls for free. It lets you place video calls, voice calls, and text messages for free.

Here are the best features of Google Hangouts.

Facebook Messenger is a free app that lets you send text messages, photos, and videos to friends. You can also make voice calls to people who have the app.

If you want to call someone who doesn’t have an iPhone or has an Android phone.

Skype is a free calling and messaging app that allows users to call landlines and mobiles around the world for free. You can also make video calls with Skype, which can be useful if you’re trying to communicate with someone who doesn’t speak your language. The app is available on iOS, Android, Windows Phone, Mac OS X and Linux computers as well as Xbox One consoles.

Rebtel is one of the best apps for making calls internationally at a very cheap rate. It is an app that provides international calling and messaging services to its users, using their smartphones.

Rebtel allows you to make calls and send messages from your iPhone or Android device, even when you are abroad.

The first thing you have to do before using this app is sign up with them. By entering your email address and creating a password in order to use all of its features. After that, download it from App Store or Play Store depending on whether you use an iPhone or Android device respectively. then log into the account that was created after registration by entering the username & password. Provided earlier into the login field of Rebtel’s main menu screen as shown below.

Line is a free app that lets you call, text, and video chat with other Line users. It’s available in multiple languages, including English (for those who want to make international calls), French, German, Indonesian, Japanese, Korean and Thai.

Line offers its services for free; however, there are some limitations. you can only send photo messages between 10 am and 12 pm every day.

You cannot send voice or video messages during that time either—they will be sent as normal text messages instead of multimedia content.

If you’re looking to make international calls using your mobile device then Line is a good choice. it supports HD video calling with up to 200 people at once. And if you have friends who also use Line then you can call them for free as well—just type their phone number into the app’s search bar or find them from your contacts list.

Tango is a video calling and messaging app that uses your phone number to connect with friends and family. You can make free one-to-one or group calls, share photos and videos, send messages, and more.

It’s easy to use Tango because there are no accounts or usernames needed—just download the app and sign in using your phone number. Tango is available in more than 200 countries and territories worldwide so it’s easy to stay connected with people wherever they live around the world.

IMO Messenger is one of the best international calling apps for iPhone users. With IMO Messenger, you can call and text anyone, anywhere in the world for free. The app offers high-quality voice and video calling features that allow you to make calls without any limitations or restrictions.

IMO Messenger is available on both iOS and Android devices and has a simple interface that makes using it very easy even for those who are new to messaging apps.

In addition to being able to communicate with friends and family around the world, IMO Messenger also comes with an array of stickers that you can use while chatting with other users on this app

Voxofon is a free calling app that allows you to call any phone number in the world. This means you can call anyone, anywhere—even if they don’t have Voxofon. You can also call your friends and family for free, making this one of the best international calling apps around.

The app works on both iPhone and Android devices and doesn’t require an Internet connection. so you can use it even when you’re away from WiFi or data. It also comes with desktop software that allows users to make calls from their laptops or PCs as well.

KakaoTalk is a messaging app with a focus on privacy and security, which means it doesn’t store your messages in the cloud as other apps do. It’s popular in South Korea, where it has over 100 million users, but it also has tens of millions of users around the world.

KakaoTalk offers free voice and video calling, in addition to its many stickers that can be used for fun or serious conversations. You can even send money through KakaoTalk using your PayPal account if you have one set up (though this feature is only available for Android devices).

International calling is easier than ever, thanks to these apps.

International calling is easier than ever, thanks to these apps.

International calling can be a hassle. You have to figure out which country you want to call and then pay an exorbitant international per-minute rate that can run into the hundreds of dollars for just one call.

But those days are in the past—thanks to free app-based services like Skype or Line. you can make cheap international calls from your iPhone in just a couple clicks. And since most of these apps have desktop versions as well, you won’t even need your phone for every conversation.

All it takes is setting up a profile on an app like Viber or WhatsApp and connecting with friends. who have also installed the same software on their devices (or computers). You’ll be able to see each other’s avatars during calls and send messages back and forth through text chat windows. if someone doesn’t want voice over IP (VoIP) features enabled while they’re using their device. they’ll still be able to receive incoming calls without having any audio output coming out of speakers or headphones connected directly into them at all times (which could get annoying).

Also read more: How To Get Free Text Messages On Your Android Phone

The good news is that international calling apps are becoming more and more popular. As this list shows, there are many different options out there for you to choose from, so you’re bound to find one that suits your needs! If you have any questions about our choices or want more information on them in general, please contact us at [email protected]