Curcumin for Arthritis & Joint Pain: Does it Really Work? 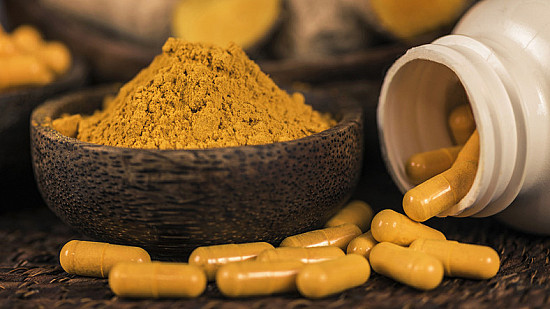 Curcumin is an active ingredient in turmeric

Curcumin is an active ingredient in the popular spice turmeric, and it has been gaining a lot of attention in recent years for its potential benefits for those suffering from arthritis and joint pain. Curcumin has powerful anti-inflammatory properties which have been shown to reduce inflammation in the joints, thus helping to ease the pain associated with arthritis and other forms of joint pain.

There have been several studies conducted to assess the effectiveness of curcumin as an arthritis treatment. One study found that taking curcumin orally for 8 weeks significantly reduced knee pain in patients with osteoarthritis. In another study, subjects who took curcumin saw improvements in their pain and physical function compared to those taking a placebo.

The anti-inflammatory effects of curcumin can also help to improve the overall health of the joints. Curcumin has been shown to inhibit the production of certain enzymes that can cause joint damage, thus helping to protect against further deterioration of joint tissue. Additionally, some research suggests that curcumin may help to promote the growth of new cartilage, which could help to reduce the progression of arthritis over time.

Overall, it appears that curcumin may be a beneficial supplement for those suffering from arthritis and joint pain. While more research is needed to fully understand the potential benefits, preliminary evidence suggests that this natural remedy could be a useful tool for managing the symptoms of arthritis and improving overall joint health.

Curcumin has anti-inflammatory and antioxidant properties

Curcumin, a key compound found in turmeric root, has been used in traditional medicine for thousands of years. In recent times, it has become increasingly popular for treating a variety of health conditions, including arthritis and joint pain. Studies have suggested that curcumin may be able to provide relief from these conditions due to its anti-inflammatory and antioxidant properties.

Recent scientific studies have shown that curcumin can inhibit the release of pro-inflammatory cytokines, which are proteins that play a role in inflammation. In addition, curcumin has also been shown to reduce inflammation caused by rheumatoid arthritis, as well as inflammation in the joints associated with osteoarthritis.

In terms of its antioxidant properties, curcumin has been found to be even more effective than certain synthetic antioxidants. It can help protect your body’s cells from damage caused by free radicals, which are molecules that can cause oxidative stress in the body. Oxidative stress is linked to many diseases, including arthritis and joint pain.

Curcumin is thought to be especially beneficial when taken as part of a holistic treatment plan that includes lifestyle changes, such as exercise and eating a healthy diet. If you’re considering adding curcumin to your treatment regimen, it’s important to consult with your doctor first to ensure that it’s safe for you.

The use of curcumin supplements for arthritis and joint pain relief has become increasingly popular in recent years. Curcumin, a compound found in the spice turmeric, is known for its anti-inflammatory and antioxidant properties which can help reduce inflammation and pain associated with arthritis. As a result, many people are turning to curcumin as a natural treatment option for their joint pain.

When considering a curcumin supplement, be sure to look for products that contain at least 95% pure curcuminoids (the active ingredient). Additionally, look for supplements that are made from standardized extracts so that you know exactly how much curcumin is in each dose. Some supplements also contain other ingredients such as piperine or ginger extract, which can help increase the absorption rate of the curcumin into the body.

Finally, when choosing a curcumin supplement, make sure to consult with your healthcare provider to make sure it’s safe for you. Also, be aware that it may take several weeks for the full effects of the supplement to kick in. With regular use, however, many people find that curcumin can be effective in reducing their joint pain and inflammation caused by arthritis.

Clinical studies on curcumin and arthritis are promising

Recent studies suggest that curcumin, the active compound found in turmeric, may have beneficial effects on arthritis and joint pain. In particular, clinical trials have shown that curcumin can help reduce inflammation and symptoms of both rheumatoid arthritis and osteoarthritis.

A recent systematic review of 15 randomized clinical trials conducted over 10 years found that curcumin, when taken as a supplement, was associated with improvements in symptoms of pain and stiffness as well as improved physical function in people with rheumatoid arthritis. Additionally, two separate studies found that curcumin was able to reduce the need for nonsteroidal anti-inflammatory drugs (NSAIDs) in people with osteoarthritis.

Further studies are still needed to confirm these findings, but the initial research is promising. As an anti-inflammatory agent, curcumin may be able to help alleviate the pain and inflammation associated with both forms of arthritis. Therefore, it is important for those suffering from arthritis or joint pain to speak with their doctor about potential benefits of taking a curcumin supplement.

Curcumin is generally well tolerated, but some side effects have been reported

Curcumin is a natural compound found in the spice turmeric, and it has been used for centuries in traditional medicine. Recently, curcumin has been studied for its potential to provide relief from arthritis and joint pain. While research is still ongoing, some studies have shown that curcumin may help reduce inflammation and joint pain associated with arthritis.

However, it is important to note that curcumin is generally well tolerated, but some side effects have been reported. The most common side effects of curcumin are gastrointestinal discomfort, nausea, and headaches. It is also possible that long-term use of curcumin can cause liver damage. Therefore, it is important to talk to your doctor before taking curcumin or any other supplement, to make sure it is safe for you.

In addition, while there is evidence that curcumin may be beneficial for treating arthritis and joint pain, more research is needed to confirm these findings. If you are interested in trying curcumin for your arthritis or joint pain, it is important to speak with your doctor to make sure it is safe for you to take and to determine the proper dosage for your individual needs.

The bottom line is that while there is promising evidence to suggest curcumin may help reduce inflammation and joint pain associated with arthritis, more research needs to be done to determine its efficacy in relieving these symptoms. Until then, it’s always important to talk to your doctor before taking any supplements or making drastic dietary changes. While curcumin may help relieve the symptoms of arthritis, it is always best to discuss with a healthcare professional about how to best treat your condition and what steps you can take to manage it.